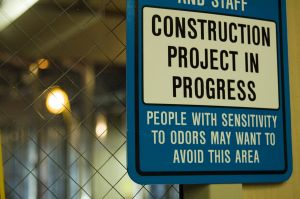 It appears architects are as lost as anyone when it comes to definite solutions for solving the climate change issue.

As Keith Clarke, chief executive of architect firm Atkins, said: “We don’t know what we’re doing. Anyone who says they’ve solved the problem of getting zero carbon buildings is lying.

“What architects must try and do is solve these problems without a complete retreat to utility.”

The presentations all had an entirely different take on the interaction between architecture and the environment.

Morris’s proposal saw sectors of intense land use linked by green bridges and corridors and based around current road and rail systems. “Plug-in” easy to assemble dwellings can expand vertically or horizontally in the residential zones. These areas would have “vertical allotments” – essentially trellises – as well as integrated small holdings to promote locally growing produce and a micro market economy.

Nathan Jones of 5th Studio visualised recreating post-industrial landscapes as buildings that meet level 5 sustainable development guidelines. The buildings would be insulated and have solar panels, as well as a biomass boiler.

Interestingly Jones estimates these developments would add approximately 30 per cent to construction values – a cost that the consumer may not be willing to absorb and that he hopes may be subsidised.

Tony Broomhead and Nichols Kirk to of Amenity Space envisage reusing waste as a construction material.

After hearing the folklore maxim: “If you can build a house in one night and you have smoke coming from the chimney the land is yours,” they did exactly that. In the middle of Alexanderplatz, Berlin. The police asked them to move.

They are currently working on a project in North London where old floorboards and other waste materials are being used as interior decoration.

Robert Sakula of Ash Sakula Architects discussed a project he wants to talk forward in Holborn. Sakula is hoping to redevelop the Central School of Art and Design, in Holborn Square.

But this is no standard redevelopment – they want to cut traffic through the square and redirect it down Theobald’s Road and Southampton Row, and turn the remaining space into a pedestrian zone similar to Covent Garden.

Offices would be encouraged to turn out lights at night and have smaller candle lights in the windows.

Annalie Riches and David Mikhail of Riches Hawley Mikhail Architects envisaged a green development of a community of under 20 houses, arranged so as to avoid overshadowing and maximise passive solar gain. The buildings face south and are arranged so that rain from the roofs filters into the gardens.

The houses are designed so sunlight penetrates throughout them. They would be made from prefab timber frames and sprayed with lime hemp to give them thermal mass.

The houses have no membranes so would be breathable, and the walls would be made from compressed, unfired earth. Surrounding land would be ridged with swales and perimeter drainage ditches would collect water.

Richard Coutts of BACA Architects envisioned a world where instead of fighting floods, towns in flood plains and by the sea are built to accommodate them and integrate the water with their environment. Some housing could even be built in tidal areas.

Waterproof housing would be entirely flood resistant, and flood barriers could be used to trap tides and then extract energy for them as they recede.

Ben Addy from Moxon Architects wants to conduct an entire asset audit of the space of a city and then use space creatively – fitting small living areas in the spaces around the city. Central chimney stacks could be used to create a convection ventilation system similar to that used in the Bedzed development.

Jerry Tate of Jerry Tate architects showed the audience an astounding vision; a proposed hotel complex on the Dubai waterfront based on patterns found in nature. Tate has particularly studied plant growth and insect exoskeletons to create a design that intends to blur the boundaries between nature and urban living.

“We’re trying to move towards creating a smoother landscape with less hard edges – nature’s building methods are efficient and we’ve looked at them carefully,” he said. We want to make things as beautiful and efficient as a spider’s web.