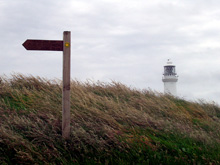 Yorkshire, not content with dominating the world of terriers and puddings, is now out to take Britain’s crown for most environmentally friendly building. (This picture isn’t it, obviously, it’s just a nice shot of the Yorkshire coast.)

The building in question is the Environmental Energy Technology Centre in Rotherham, which is being tarted up by TNEI Services, courtesy of a chuffing great £8.7 million wind turbine which will help generate hydrogen for fuel, allowing the building to become energy self sufficient.

NE Business adds this little snippet about TNEI too:

The company has also secured a contract to provide renewable energy wind turbines for up to 2,000 Tesco stores. The roll out of these new turbines has begun in the North-East with the installation of a turbine at Tesco’s store in Newton Aycliffe in County Durham. The turbines differ from the standard ones in that they are vertical axis machines. Instead of rotating like a windmill, the new turbines are smaller and have compact rotors consisting of six vertical aerofoils.