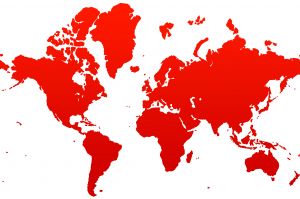 It’s not what Greenbang usually covers, but our reporter Yan Yan was caught up in China’s earthquake today. Here is her account…

Busy Monday afternoon. I was sitting at the office and working as usual. All of a sudden, I felt kind of dizzy, and after a few seconds, I saw my table was shaking.

“Is it an earthquake?” the co-worker who was sitting beside asked, which confirmed my thought – it is an earthquake! We are on the 20th floor, if the earthquake is a severe one, what can I do? I was a little nervous and scared.

“We should go out,” I heard someone said. And I walked quickly to the front door with other colleagues.

More and more people got together around the hallway to the stairs. At this moment, the building was still shaking. Somehow, with many familiar faces of colleagues around me, I feel kind of relieved and safe.

We were orderly walking downstairs, and got stuck several times probably because as increasing numbers of people from lower floors joined the stream. And the worse part was the door toward another set of stairs was locked! All the people in the building had only one way to leave.

While walking, most people were also busy making calls or texting messages. I called my parents and told them an earthquake is hitting Beijing and I would be fine, though I was not sure whether I would be fine or not. It is the first time in my life to experience an earthquake.

The way from the 20th floor to the ground was a long journey. But it has never been so long. I thought of the Americans who worked in the World Trade Center on 911 – but I dare not think of any “what ifs”.

Finally, it took us almost an hour to get to the exit of the building. Suddenly, I found Beijing’s grey sky was so lovely, much better than the grey stairs.

I waited aside the lawn around the building with other colleagues. About five minutes later, it started to rain. I called my friends to make sure they were fine. The weird thing was: people who work in the south and west Beijing did not feel any tremors. Only those who are in the east of Beijing felt it and were evacuated from their office building.

I don’t feel any safer to go back to the department I rent which was built in early 1990s. So I stayed for a while, and checked some news on-line. Here is what Xinhua told us about this earthquake:

The quake struck at 2:35 p.m. Beijing Time and the epicenter was initially determined to be 39.8 degrees north latitude and 116.8 degrees east longitude, according to the China’s Seismological Forecast Network.

And more severe earthquake was happened in Sizhuang province in southwest China, according to Xinhua.