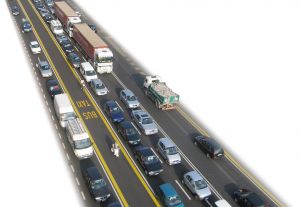 You know all those cheesy futuristic movies from past decades in which the hero — either pursuing a bad guy or running away from one — leaps aboard a driverless transport pod and makes his escape along the safe, silent and automated high-tech highway? Well, a consortium of organisations in Europe is exploring ways in which to make such a transportation system a possibility along today’s less-than-safe, carbon-emitting roads.

The SARTRE project envisions a future with intelligent transport networks traversed by so-called “road trains” (that’s where SARTRE gets its name: it stands for “safe road trains for the environment”): six to eight driverless cars guided along by a lead truck of some sort. Motorists could automatically become a part of such a train by driving to the right place and then letting go of the steering wheel; to leave the train, they would retake the wheel and resume driving the old-fashioned way.

Such “assisted convoys” would not only free motorists from the hassle of actually having to drive for parts of trips, but could improve highway safety and reduce fuel consumption, experts involved in the project say.

The fuel savings would come from something already well understood by migrating birds and racing road cyclists. By falling into formation behind one another, a group of travelers — human or avian — can reduce the amount of energy each individual would otherwise have to expend alone to cover the same distance. Translating that concept onto “road trains” could cut gas consumption by some 20 per cent, according to the folks at SARTRE.

Researchers behind the project imagine groups of future motorists being able to take advantage of such a system to, with the help of wireless communications, be able to read, rest, eat, make phone calls and more during trips that, today, require a driver’s full attention behind the wheel.

The group behind SARTRE includes Volvo, Spain’s  Tecnalia Technology Corporation and other partners from the car industry, public transport operators, universities and technological centres. With a budget of €19 million, the project is set to begin field trials in Spain next year.