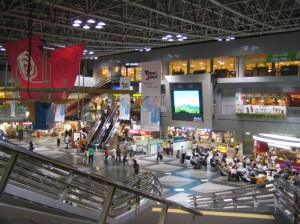 According to this article on Japan Today the system, which will be introduced in 2010, will provide almost a third of the cooling energy for the terminal building.

The government tried collecting snow at the airport last winter and found it could retain almost half of it by September by covering it with heat insulating materials. The snow is used to chill the liquid used in the airport’s cooling system in summer.

“Doing so would lead to a cut of some 2,100 tons of carbon dioxide emissions annually, according to the officials.”