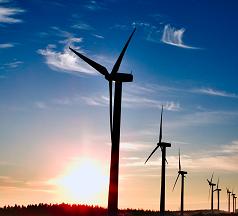 Here’s a good thing. A group the size of Kraft, which turns over the GDP of Romania in a week or something, investing in wind power.

And not only that, but wind power to the Gillette Stadium, home of the New England Patriots. The sporty businesslike Kraft family, you see, owns the American Football team. And the company it has struck a deal with – Constellation NewEnergy – is trumping said contract.

Which means that thousands of American Throwleather fans will hear all about it, and perhaps consider investing themselves.

Mother nature will be beaming.

Constellation Energy today announced that its subsidiary, Constellation NewEnergy, is now the “Green Power Behind the Patriots.” Constellation NewEnergy, which has an existing power agreement to serve Gillette Stadium, will secure Renewable Energy Credits (RECs) to match the stadium’s electricity usage with wind power before, during and after all New England Patriots pre-season, regular and post-season home games.

“The New England Patriots organization is committed to reducing our collective carbon footprint,” said Jonathan Kraft, President of the New England Patriots and The Kraft Group. “Building upon our already successful relationship with Constellation NewEnergy, we are asking them to help us meet our goal of matching each game with renewable energy.”