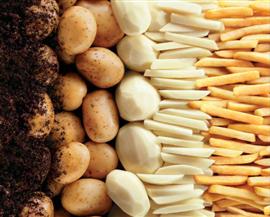 Usually when Greenbang talks about chips, it’s the kind that power a computer.

But this time it’s the staple-diet-of-the-UK kind.

The company claims this will cut its lecky bills by 60 per cent.

Well done McCain – Greenbang’s not really into your food, but he likes the way you’re thinking.

This from the press release:

The 80 metre high turbines, will be the highest ever on shore in England, and will power the entire site at certain times of the year, providing up to 60% of the annual electrical power required to operate the plant. The turbines can produce 3 mega watts of electricity each, the most powerful currently in use in the , and when the plant is not operating, unused electricity will be put into the National Grid.

The turbines will be erected and operational in November 2007 and aim to ensure the long term viability of the Whittlesey plant. The wind turbines are just one of many environmental initiatives that McCain has introduced. Across all of its UK facilities, McCain is continuing to innovate and introduce new technology designed to limit the company’s impact on the environment. These include: