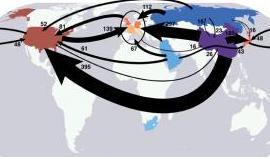 That’s because, whenever it imports goods from other parts of the world, a nation is effectively “outsourcing” its carbon emissions to the export country. It makes sense, when you think about it: if you stop making widgets at home, you’ve reduced your widget-related carbon emissions. But, unless you choose to do without widgets at all, you’re still getting widgets from somewhere. So your widget-producing trade partner has actually moved your widget-related emissions onto its own soil.

In a globalised economy that ships millions of different widgets of various kinds around the world every day, that emissions outsourcing can be anything but minuscule, according to new research from the Carnegie Institution.

Ken Caldeira and Steven Davis, both researchers at Carnegie’s Department of Global Ecology, have found the US, Japan and western Europe outsource considerable amounts of their carbon emissions by importing goods from other countries, typically developing ones like China. Their results were often surprising, as with the case of Switzerland, which turns out to be far less low-carbon than it would appear on paper.

While Switzerland ranked 63rd in national carbon emissions in 2006, those figures told literally less than half the story. Davis and Caldeira’s analysis found that the emissions associated with Switzerland’s imports actually exceeded the amount of carbon dioxide emitted within its borders. The same was true for several other small countries, according to the researchers.

In fact, in parts of Europe, the per capita footprint for outsourced carbon dioxide emissions amounted to more than 4 tonnes per person … considerably more than the 2.5 tonnes per person in the US, which generally enjoys a far less green reputation than its EU counterparts.

Davis, lead author of the study, said the findings could actually help overcome some of the obstacles that have stood in the way of reaching a global agreement on carbon dioxide emissions cuts.

“Where CO2 emissions occur doesn’t matter to the climate system,” he said. “Effective policy must have global scope. To the extent that constraints on developing countries’ emissions are the major impediment to effective international climate policy, allocating responsibility for some portion of these emissions to final consumers elsewhere may represent an opportunity for compromise.”

Can anyone say “carbon sales tax”?