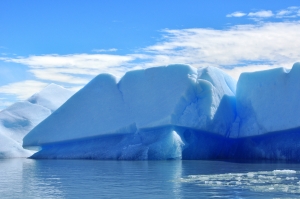 With just 70 to 75 per cent as much sunlight hitting the Earth in its early days four billion years ago, why wasn’t the planet frozen solid?

Scientists have theorised that high concentrations of carbon dioxide must have fueled a greenhouse effect that kept Earth warmer than it otherwise would have been. However, researchers studying the mineral content of 3.8-billion-year-old marine rocks from Greenland found that wasn’t the case.

Instead, they suggest, the early Earth was relatively low on actual landmass compared to today, but rich in water. They believe the global ocean back then was vast enough that it could absorb a far greater percentage of incoming solar energy than today’s oceans can … and that that level of absorption was enough to keep our planet from becoming a giant ball of ice.

The crux of the theory is that because oceans are darker than continents, particularly before plants and soils covered landmasses, seas absorb more sunlight.

“It’s the same phenomenon you will experience if you drive to Wal-Mart on a hot day and step out of your car onto the asphalt,” said Dennis Bird, a professor of geological and environmental sciences at Stanford University. “It’s really hot walking across the blacktop until you get onto the white concrete sidewalk.”

Another key component of the theory is in the clouds: “Not all clouds are the same,” Bird said.

Clouds reflect sunlight back into space to a degree, cooling Earth, but how effective they are depends on the number of tiny particles available to serve as nuclei around which the water droplets can condense. An abundance of nuclei means more droplets of a smaller size, which makes for a denser cloud and a greater reflectivity, or albedo, on the part of the cloud.

Most nuclei today are generated by plants or algae and promote the formation of numerous small droplets. But plants and algae didn’t flourish until much later in Earth’s history, so their contribution of potential nuclei to the planetary atmosphere of four billion years ago would have been minimal. The few nuclei that might have been available would likely have come from erosion of rock on the small, rare landmasses of the day and would have caused larger droplets that were essentially transparent to the solar energy that came in to Earth, Bird explained.

“We put together some models that demonstrate, with the slow continental growth and with a limited amount of clouds, you could keep water above freezing throughout geologic history,” Bird said.