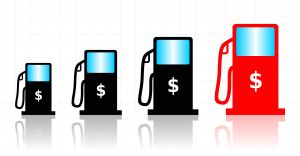 In the good-versus-evil, broad-brush-strokes world of modern politics, it’s always someone’s fault when the price of oil — and, consequently, prices at the pump, grocery store and elsewhere — goes up. Back in fact-based reality, though, the truth, as always, is far more complicated.

So why is West Texas Intermediate crude at a nine-month high of around $108 a barrel? Why is Brent crude at more than $124 a barrel? And why have gas prices in California slipped past $5 a gallon in places?

While you’ll hear plenty of cries of “Obama,” “speculators,” “Iran,” “Keystone XL,” “peak oil” and “China,” the real reason is a complex, ever-changing mashup of seven key factors, according to the US Energy Information Administration (EIA). They include:

In a 2011 paper looking at what caused oil prices to swing wildly in 2007 and 2008, a team of researchers examined nearly 200 reports, articles and industry/policy documents and concluded:

“The recent behavior of oil prices has attracted much attention and generated much debate about the forces that drove price changes. One view is that recent oil price behavior was due to fundamental supply and demand factors. The principal opposing view attributes the run up in prices to excess speculation and possibly manipulation. The empirical evidence suggests that this is not a black and white issue but that both forces may have contributed to the recent escalation in oil prices.”

Why are oil prices going up, in other words? Given the choice of reasons, our best answer will generally be “all of the above”.

And that, President Obama told a gathering at the University of Miami this week, is why we need an “all-of-the-above”-type of energy strategy:

“You know there are no quick fixes to this problem. You know we can’t just drill our way to lower gas prices. If we’re going to take control of our energy future and can start avoiding these annual gas price spikes that happen every year — when the economy starts getting better, world demand starts increasing, turmoil in the Middle East or some other parts of the world — if we’re going to avoid being at the mercy of these world events, we’ve got to have a sustained, all-of-the-above strategy that develops every available source of American energy. Yes, oil and gas, but also wind and solar and nuclear and biofuels, and more.”