Who’d be a cyclist in London? 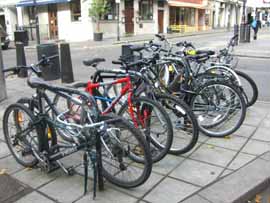 A cyclist’s life in London consists of shortcuts and dodging large vehicles that almost knock you down, which makes us wonder why some cyclists choose to do it in the first place?

I spoke with bike courier Chris Perry, 20 from Epping Forrest, who travels in on his bike into the West End every day. He told me that Soho is one of his favorite areas to ride as the pace is much slower than other parts of London, and there is much less traffic.

“It’s a lot faster for local jobs and more enviromentally friendly, too. When leaving my bike in Soho I tend not to use the bike racks and will use a tall lampost, or a signpost, to stop people from stealing it.”

It would appear that Soho is a safe, easy place to ride your bike with the only drawback being that you have to recognise the complex one way systems that characterise the area.

James Mayer (pictured), 19, a student from Camden told us: “It’s much cheaper and better for the environment”, he also pointed out how Westminter City Council does a lot to encourage cyclists by making it a safe area with lots of areas to lock up your bikes.

In recent years, the government has invested heavily in improving conditions for cyclists. Over the past year the number of cyclists has grown by 83 per cent, with an average of 480,000 iding to work every morning.

Transport for London has been proactive in encouraging cyclists back on to the roads. It has extended the cycling network and provided more cycle parking. But has it done enough to make the rest of London safe enough for anyone to cycle on?