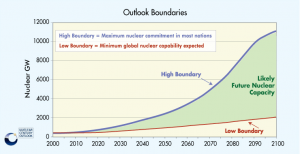 Nuclear energy is a lot of things: reliable, controversial, fraught with economic and engineering challenges. And — in the aftermath of Fukushima but with an urgent global need to decarbonize our energy — it now finds itself at a crossroads.

Will it become the go-to source for clean power in the future? Will a combination of obstacles (escalating costs, public opposition, geopolitical worries) see nuclear fade away? Or will its contribution to world energy supplies — about 14 percent of all electricity generated — stay about the same as it is today?

While the US recently approved its first new nuclear reactor in 30 years, energy-hungry China has been building reactors like crazy, with 26 new facilities currently under construction, another 51 in the planning stages and 120 additional being proposed.

And while Germany moves ahead with plans to phase out nuclear energy, other countries in Europe show no interest in reducing their dependence on nuclear for a large chunk of the power they consume.

So which countries currently rely most on nuclear power for their electricity? According to the World Nuclear Association, these were the top 10 nuclear-dependent nations in 2011:

1 thought on “Which countries use the most nuclear power?”