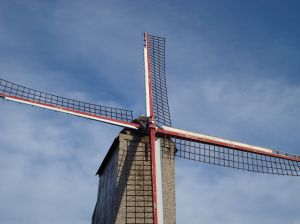 The number of wind farms spouting the UK hills is staggering. Following a conversation Greenbang had with a stock broker last night, you have to wonder if it’s just because of the generous government subsidies that exist for wind that make it profitable.

But would it be profitable without them? That’s an unpopular topic in the UK.

Anyway, here’s news of yet another wind development. Renewable Energy Holdings is to buy a wind farm development in Llangurig, Powys, mid-Wales for “just under £16 million”, payable in stages as the project progresses.

Contrary to popular belief, the banks are still paying out as can clearly be shown here. This will be funded from the the company’s project finance facility with Standard Chartered Bank of approximately €177 million.

The company hopes the wind farm will be operational by 2010/11, when it will start contributing towards the government’s target to generate 10% of the UK’s energy from renewable sources by 2010.  Currently the UK’s annual total electricity consumption is approximately 75 TWh per annum.  The 200,000 GWh produced by the wind farm would contribute 0.26% towards this total.