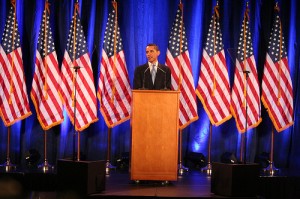 So Obama made it. It feels like the scene in Star Wars after the emperor dies and all people start partying. Greenbang would most certainly be on the ewok planet – the outdoor party looked most fun.

Obama has managed to oust an oaf who has turned the world upside down in just eight short years. Let’s hope we won’t be saying the same thing about the new guy.

Why does Obama matter to Greenbang? Well he could really accelerate funding and promotion of clean tech projects. Essentially, he could speed up the move away from a dependency on oil – that’s part of what he’s promised.

While the oil companies, god bless ’em, will probably be a little miffed at that given their current record of investment in clean tech is all about hydrocarbons, President Obama backs a big nationwide plan to boost financing for alternative energy.

And if the US does it, so will the UK.

Anyway – while it’s still fresh and he hasn’t made any errors yet, a big well done President Obama. Let’s hope he really can deliver.