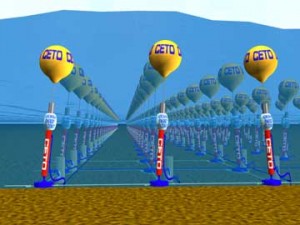 AIM-listed Renewable Energy Holdings (REH) has completed the installation of, and is now operating, three underwater pumps at the Western Australia test site of its CETO II wave power system off the coast of Freemantle, Perth.

CETO is REH’s proprietary wave energy technology that converts the energy of the waves into zero-emission electricity and zero-emission freshwater. The difference with other wave power tech is that CETO is fully submerged under the ocean and pumps water ashore to either a turbine to produce electricity, or to a reverse osmosis filter to produce fresh water.

This is the first time that multiple CETO II pumps have been installed and operated together in an array format and if this stage is successful a full-scale pump, CETO III, will be built and deployed at the test site early next year.

The company says it is confident of developing commercial CETO wave energy device sites in Europe and North America, including Mexico, the Caribbean and the Mediterranean.

“This is an important milestone for the commercialisation of our technology, as we can now instrument and record an aggregation of pumps working together. We plan to collect operating data for this array of three pumps, and to add several more pumps to the aggregation. This will pave the way for the construction of the CETO III commercial scale pump and its deployment in early 2009.”

And it’s not just wave energy that the company is aiming to commercialise. REH is also owns two wind farm sites in Germany, producing a total of around 40MW, and is at various stages of development of further wind farm sites in Poland and Wales. In addition, the company owns a methane landfill gas project in Powys, Wales which is at an early stage of gas collection, currently producing at 1MW and which is expected to increase as the landfill matures.

More on the CETO project here.