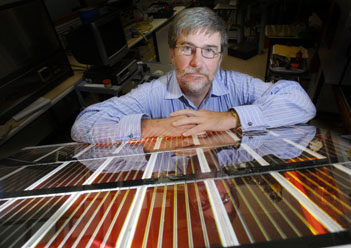 People in glass houses shouldn’t throw stones, so the saying goes. Greenbang always wondered what type of person lives in a greenhouse to start with and why they would keep stones lying around indoors let alone feel obliged to lob them about, but that’s another matter. But now there’s another reason not to throw stones: it could damage the solar panels.

Why? The University of Queensland Institute of Sustainable Resources, along Canberra company Dyesol, has come up with a transparent solar panel that could be used as windows as well as a means of generating energy. The tech could be on the market within years apparently.

The only downside? Your windows would have a faint reddish hue, according to Professor John Bell of the University (that’s him in the picture there). Here’s more from Queensland:

Professor Bell said it would be possible to build houses made entirely of the transparent solar cells.

“As long as a house is designed throughout for energy efficiency, with low-energy appliances it is conceivable it could be self-sustaining in its power requirements using the solar-cell glass,” he said.