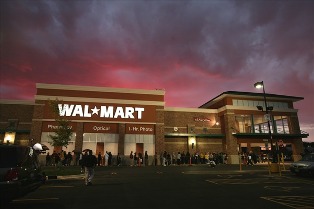 US retail giant Wal-Mart has announced a new scheme to measure the greenhouse gases emitted across its supply chain.

It will work in partnership with the Carbon Disclosure Project to figure this all out–and the move means that up to 60,000 companies dealing with Wal-Mart could be asked to calculate their emissions. For the moment though, the pilot programme will focus on key essentials, such as toothpaste, vacuum cleaners–and beer.

Although the company isn’t usually feted as a green pioneer, the move makes sense for it, because cutting emissions typically leads to costs cuts–something it definitely is a leader in. As an aside, one of Greenbang’s American colleagues recently visited the team in London and spent several minutes waxing lyrical about the prices at Wal-Mart (to the general astonishment of the locals).
And if the firm’s nice words can be believed, there’s a lot more to come from all this:

“This is an important first step toward reaching our goal of removing non-renewable energy from the products Wal-Mart sells,” said John Fleming, executive vice president and chief merchandising officer, Wal-Mart Stores Division. “This is an opportunity to spur innovation and efficiency throughout our supply chain that will not only help protect the environment but save people money at the same time.”