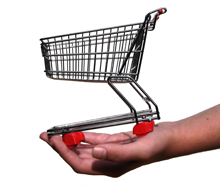 If Greenbang suddenly found herself 50 feet tall, she’d probably spend all day crushing cars like they were ants, and peering in the windows of towerblocks. Possibly striding across the English Channel for tea in France when things got a little boring.

However, other giants want to use their powers for good. Take Wal-Mart for example, the biggest retail chain there is out there. Reuters reveals that Wal-Mart CEO Lee Scott has been chatting on the subject at a recent conference is going to have a word with its thousands of suppliers in China with a view to asking them to cut their waste and emissions in the factories that are responsible for making Wal-Mart goods.

Reuters also reveals that Wal-Mart is asking its Chinese suppliers to do better on environmentally friendly sourcing and is working with non-government organisations to get plant inspectors on the right track with sustainability.

And that’s not all – says Lee Scott – Chinese suppliers will be asked to cut packaging and be more energy efficient to boot. Scott didn’t give any figures on how much suppliers will have to improve on either, but it has recently asked US suppliers to cut waste by 5 percent by 2013.

Wal-Mart hasn’t been shy of talking about its green initiatives of late, and it’s even been asking Joe Public to put forward suggestions on green business ideas.