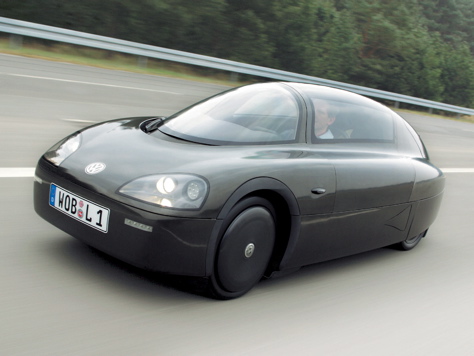 About a month ago Greenbang went up to Liverpool where she was told by several exhibitors that ‘car designers would aim for 99g CO2 /km (about 74mpg) to give its drivers free road tax instead of going any lower.’  As the government targets shift so will the designer’s aims.

Well, it appears they were wrong.   There are several rumours around that VW will launch a car capable of 235mpg within two years.  It’s based on a 2002 concept car and uses the two basics that all cars should have – leightweight and aerodynamic – combined with a 1 litre diesel electric hybrid engine.

VW hasgone to quite extreme levels to look at aerodynamics it seems.  The more astute will see it has no wing mirrors, these have been replaced by cameras.