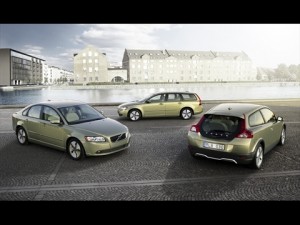 You can expect a bit of an eco-car frenzy over the next few weeks as the car manufacturers gear up for the big Paris Motor Show in early October. Expect plenty of greenwash too.

But first out of the eco-blocks is Volvo, bigging up new more economical diesel versions of its C30, S40 and V50 models that will be on display at the Motor Show.

The C30 clocks in with CO2 figures of 115g/km and the S40 and V50 come in at 118g/km, which Volvo claims gives them best-in-class CO2 emissions. The cars come with Volvo’s ‘DRIVe’ badge to signal their improved environmental credentials.

Volvo expects to shift more than 20,000 1.6D DRIVe cars in Europe next year, with France, Sweden and Spain accounting for most sales.

“We wanted to demonstrate that low CO2 ratings are not solely the preserve of small diesel cars. By offering the Volvo V50 with emission levels below 120 g CO2/km, we are also making it possible for families and other customers who require extra space to make an active pro-environmental choice.”