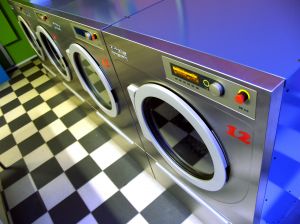 Polymer-based cleaning company Xeros and Cambridge Consultants have developed what they say is the world’s first “virtually waterless” laundry washing machine prototype. By saving up to 90 per cent of water compared to conventional machines, the Xeros process has the potential to reduce the cost of washing whilst also dramatically cutting carbon emissions.

The Xeros process replaces the majority of the water used for washing with reusable nylon polymer beads. The beads enable the machine to clean clothes in less time than traditional machines, whilst also using 30 per cent less energy and significantly less detergent than normally required. The electricity saving is increased further by reducing the need to tumble dry, assuming the end user currently does this in addition to washing.

The discovery that certain types of polymer beads could be used as a cleaning agent was made by Stephen Burkinshaw at the University of Leeds. Whilst the technology had been proven in a laboratory environment, various hurdles still needed to be addressed in order to commercialise the technology.

The Cambridge Consultants team was asked to prove the efficacy of the cleaning technology once scaled to a commercial product, and then to work out how the beads could be effectively removed from the damp clothes at the end of each cycle. Within six months’ time, the Cambridge Consultants team was able to successfully demonstrate both principles in action, and developed an initial demonstrator.

To prove the technology’s environmental credentials, Xeros commissioned an independent Life Cycle Assessment from URS Corporation. That report found that the process has the potential to display a significantly smaller carbon footprint than that of a conventional wash.

For the UK alone, it offers a positive potential environmental impact equivalent to taking 2 million cars off the road.

“Whilst we are still at a relatively early stage of this development, we have demonstrated that it is possible to develop a commercially viable washing machine that is capable of delivering all the benefits that Xeros expects from its revolutionary technology,” said Nathan Wrench, programme manager at Cambridge Consultants.

Xeros aims to have a commercially viable product in production by the end of 2010. The company’s first target will be the commercial washing market, including hotels, care homes, and high street washing outlets. Downstream, the company will look to license the technology to domestic machine manufacturers, enabling them to capture the considerably larger domestic market. The global market for laundry products next year is expected to reach around $50 billion.

“With pressure building globally for consumers to cut down both on water usage and greenhouse emissions, the time is right for a new range of devices that help us all reduce the environmental impact of washing without compromising the cleaning results we all expect,” said Bill Westwater, CEO of Xerox. “Clearly there is much pressure to get a working product into the market and I’m delighted with the speed in which Cambridge Consultants have managed to get us to this key milestone.”

Xeros is a start-up from the University of Leeds, and is backed by investor IP Group plc.