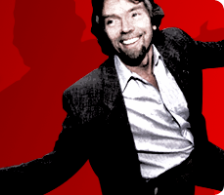 Richard Branson says Virgin will test-fly a renewable fuel-powered plane in early 2008, as part of its plans to produce clean biofuels by the start of the next decade.

An article in Red Herring notes that Virgin is working with GE and Boeing to develop new kinds of airline fuels, as part of Branson’s efforts to fight global warming.

In the meantime, Virgin will be conducting a test jet flight on renewable fuels. “Early next year we will fly one of our 747s without passengers with one of the fuels that we have developed,” Branson told the annual conference.