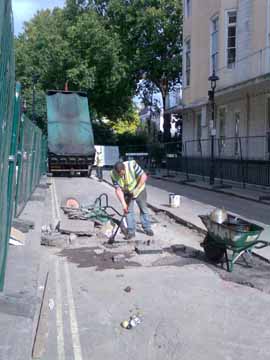 We’ve all had to deal with a water leak at home at some point – but how do you deal with dodgy city-wide plumbing that’s over 100 years’ old?

Thames Water has had quite a number of problems with leaks over the years, mainly because of the old Victorian water pipes bursting with high pressures they were not built to withstand.

It has been carrying out a ‘watermains substitution’ project throughout London. It will take up four weeks to change the mains on each street, but Thames Water is confident that by 2010 all the Victorian mains networks will be substituted.

The results will mean fewer leaks and water quality preservation. Plastic mains are being put in to replace the cast iron ones, preventing limescale build up.

The cost of the project is justified by having less damage to fix. Funds can now be spent on damage intervention and invested in research.

An inside source on the project said that the timeframe for the repairs depends on what is uncovered.

Sometimes they find bad leaks and other times long-forgotten vaults, secret rooms and passages between the buildings.

So next time you’re out and about in Soho and you have to drive around the roadworks, don’t get too annoyed – London will only benefit from this. Well, let’s hope so anyway…