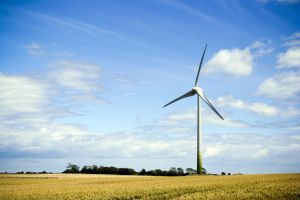 Greenbang doesn’t know if you’ve been watching a bit of the Olympics at the weekend – or if instead you have a life – but if like her, you’ve been cloistered away watching everything from ping pong to men’s weightlifting, the highlight of the weekend was the gold medal by sprinter Usain Bolt. He seemed to have been so far ahead of the competition, he could have stopped for a quick kebab and still have clinched the gold with a good few seconds to spare.

Much like the wind industry, in fact, which is growing at a rate of knots.

Industry watchers Emerging Energy Research reckon that, like Usain Bolt, the US wind market “is poised for a record-breaking surge” although there’s no gold medal in it for the power companies, just 150 GW of installed power by 2020, up from the 5,329 MW of capacity used in the US last year.

The current hotbed of the wind industry is – yeehaw! – Texas, with some 45 GW of wind developments underway in the state. As well as the Dukes of Hazzard, others that stand to do well out of the US wind boom are the turbine makers.

The Emerging Energy Research (that’s EER to you) press release reckons this:

Substantial investment in greater US wind turbine supply chain capacity will be key to wind turbine operation equipment manufacturers’ ability meet the level of US wind growth anticipated in 2008 and beyond. Recent large-scale investments in third-party wind turbine blade and tower supply has created a wind turbine manufacturing “corridor” spanning from North Dakota to Texas and from eastern Colorado to Illinois, according to EER.

EER expects that the US wind turbine sales market will climb from an estimated $12bn in 2008 to nearly $16bn by 2015. With such a substantial level of revenue up for grabs, greater industry participation is guaranteed across the wind turbine value chain from major financial institutions, power and infrastructure manufacturers, and utilities and power producers.