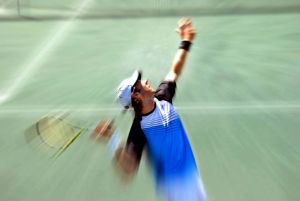 Anyone who could have been bothered staying up late on Sunday evening might have heard/watched the scowling Scottish tennis player Andy Murray beating world number one Rafael Nadal to get to the final of the US Open – a fine achievement, though Greenbang still thinks tennis is just a funny sport for posh people.

Greenbang brings up the US Open because we got a note in our inbox from the folks at the US Tennis Association (USTA) about efforts to reduce the environmental and carbon footprint of the 2008 US Open at the Billie Jean King National Tennis Center.

Here’s some of the results:

There were also a bunch of other rather less exciting green ‘awareness-raising’ activities going on for fans throughout the event as well.

“We are taking a big step with the home of the US Open becoming one of the first in the tennis community to take significant action to positively impact the environment. The US Open will serve as a springboard for other tennis events to declare their commitment and actions to a greener approach to our sport.”

The USTA says it will continue to work with environmental consultants Environmental Resources Management to further reduce the US Open’s carbon footprint and ecological impact.

It’s enough to almost make cheery Andy Murray break out from a scowl into a frown. No, seriously Greenbang wishes him the best of luck in the final against Roger Federer. He’ll need it.