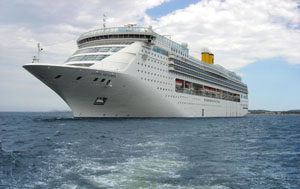 Ships look harmless, don’t they? Providing quoits-and-ballroom dancing based entertainment for the almost dead and cross-Channel, vomit-drenched transport for the rest of us. But don’t trust the scamps. Cargo boats are apparently churning out dangerous emissions like there’s no tomorrow.

According to The Associated Press, the US Senate has had enough of all this shipload of emissions coming from cargo vessels, and a Senate committee has passed a legislation that could make sure that boats only use lovely green fuel.

The problem says AP, is the “cheap, asphalt-like diesel that oceangoing ships currently burn” which has “a sulfur content many thousand times higher than the diesel sold for US trucks” and can contribute to respiratory illnesses and other unpleasantness.

The bill that made it through the Senate committee would mean that US ships, or vessels visiting US ports would need to cleaner, less sulfurouse fuel.

“The folks who live around ports and who work at the ports deserve to have the cleanest air possible. That fuel is available,” Senator Barbara Boxer is quoted as saying.

Greenbang wishes the bill safe harbour in the Senate.