US banks billions on an electric-car future 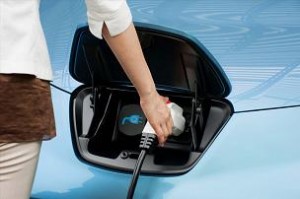 While the world’s oil companies insist they’ll dominate the energy picture for the foreseeable future, the US is placing a substantial bet elsewhere … on a coming age of advanced batteries and electric cars.

Since last September, the US Department of Energy has thrown nearly $8 billion in the direction of auto companies seeking to develop better plug-in cars. The most recent investment — announced today — delivers a $1.4 billion loan to Nissan North America, which will use the funds to retool its Tennessee factory to build the next generation of electric cars, as well as the batteries that will power them.

“This is an investment in our clean energy future,” said Energy Secretary Steven Chu. “It will bring the United States closer to reducing our dependence on foreign oil and help lower carbon pollution.”

Nissan aims to use the loan to support production of its all-electric LEAF, with the goal of eventually producing 150,000 cars and 200,000 battery packs a year at its Tennessee plant. The plan is touted as being a way to conserve up to 65.4 million gallons of petrol a year … which sounds like a lot, compared to the amount spilled by the Exxon Valdez (10.8 gallons), but is actually less than one-fifth the amount of motor gasoline the US consumes in one day.

In other words, we’re going to need a lot more than a few hundred thousand LEAFS to kick the petroleum habit.

Still, Nissan has started trying to enable the petrol-to-plug-in revolution by partnering with assorted cities, counties, states and electric companies to pave the way for a network of car-charging stations across the country.

Two other car-makers — Fort and Tesla — have embarked on similar programmes with the aid of government funds. Ford closed a $5.9 billion loan with the Department of Energy last September, while Tesla last week nabbed $465 million to built facilities in California for manufacturing electric power-trains and its Model S electric sedan.

In all, the Energy Department plans to provide up to $25 billion in direct loans to companies that can make cars and car parts in the US that help boost fuel efficiency by at least 25 per cent over 2005 levels.