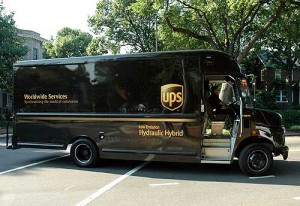 The technology, developed by the Environmental Protection Agency, has been in testing for two years and UPS has now ordered seven of the Navistar hydraulic hybrid delivery trucks.

Based on UPS’ road-testing of the technology in Detroit the prototype vehicle achieved 45 to 50 per cent improvement in fuel economy compared to conventional diesel delivery trucks. UPS says similar fuel efficiency and a 30 per cent reduction in CO2 emissions are achievable in daily, real-world use. The EPA also claims the hydraulic hybrid technology can be used equally well in other forms of transport, including shuttle and transit buses and refuse pick-up trucks.

UPS will deploy the first two of the new hydraulic hybrid vehicles in Minneapolis during the first quarter of 2009.  Eaton, which helped develop and refine the vehicle’s hydraulic hybrid power system, will monitor the fuel economy performance and emissions in the Minneapolis area. The additional five hybrid trucks will be deployed later in 2009 and early 2010.

“There is no question that hydraulic hybrids, although little known to the public, are ready for prime time use on the streets of America. We are not declaring hydraulic hybrids a panacea for our energy woes, but this technology certainly is as promising as anything we’ve seen to date.”