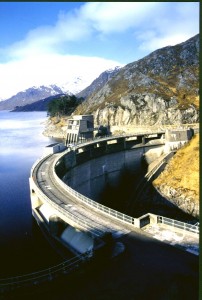 Scotland has enough untapped hydro potential to power a quarter of the nation’s homes, according to a new study.

The Forum for Renewable Energy Development in Scotland study shows there are still 657 Megawatts of financially viable hydro electricity schemes to exploit. That would power around 600,000 homes and is around half the amount of installed hydro capacity that already exists in Scotland.

The claim coincides with the passing of a key milestone on the massive £140m hydro electric power scheme at Glendoe in The Highlands, with the ceremonial closing of a sluice gate signalling the start of the dam filling up.

But the study says while there is unlikely to be much in the way of further large scale developments such as this, there is huge untapped potential in smaller and micro hydro schemes.

Installed hydro electric capacity in Scotland is 1,379 Megawatts. The study shows that using expected load factors of 40 per cent for run of river schemes and close to 100 per cent for storage schemes, the total number of additional homes that could be powered is 589,000. The Scottish Government is currently considering 10 hydro applications.

“Each scheme would have to be assessed on its own merits, but if we can turn the tap on to new hydro power we can tackle climate change and continue to stimulate economic growth.”

“Hydropower has long been the ‘quiet’ renewable and this will stimulate development of new projects of all sizes in a country which has already embraced the benign and significant role of this technology.”