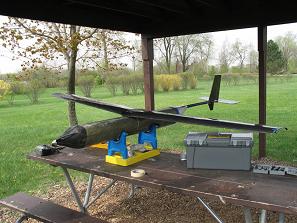 A team of students from the University of Michigan recently set a record for the longest-flight yet by a radio-controlled, fuel-cell-powered miniature airplane.

Dubbed Endurance, the plane stayed in the air over Milan, Michigan, for 10 hours, 15 minutes and four seconds, beating the previous record set in California by more than one hour. Endurance was built with the support of engineers from Adaptive Materials Inc., a fuel-cell manufacturer based in Michigan.

The university team, called SolarBubbles, is also working on a solar-powered unmanned aircraft.

Endurance not only broke the previous fuel-cell flight record, but ended its flight with enough fuel to fly about five more hours. The university team and Adaptive Materials now aim at an even loftier performance: 20 hours in the air.