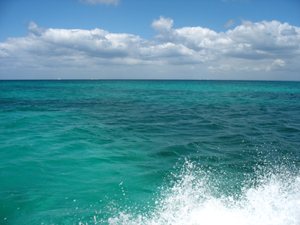 The last time Greenbang went for a stroll by the seaside, she found a strange collection of tat littered around the sea shore, the higlights of which included a peeled onion, a solitary shoe and a dragon-headed walking stick (Greenbang pities the onion-loving individual who had to get home that night). All manner of nonsense, it seems, can end up in the ocean.

However, if the UN Convention on biological diversity has its way, none of the sea-bound flotsam and jetsam will be contributing to ocean iron fertilization or OIF.

OIF is a controversial process being touted as one way to battle carbon emissions. Under OIF, iron is put into the ocean to stimulate the growth of phytoplankton, which in turn capture carbon and whip it out of the atmosphere.

Given its carbon offsetting potential, companies like Climos are already looking into the commercial potential of OIF.

Not everyone’s convinced it’s the way forward for the environment though – opponents say its untested and could lead to the acidification of the oceans.

The UN Convention seems to agree. Late last week, it voted in a temporary moratorium on ocean iron fertilisation “in light of questions about the effectiveness of ocean fertilization for climate change mitigation and its potential adverse impacts on marine biodiversity”.

According to Reuters, over 200 countries at a recent Convention summit backed the moratorium with the delegates opting to use the London Convention, which controls dumping waste at sea, to govern OIF.

According to the London Convention, there’s not enough scientific research around at the moment, saying last year “knowledge about the effectiveness and potential environmental impacts of ocean iron fertilization currently is insufficient to justify large-scale operations”.