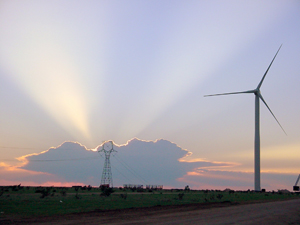 It’s a problem that Greenbang has mentioned before.  How do you store the vast quantities of electricity being produced if it’s not being used?

A coal power station can generally make a guess at the amount of energy needed and adjust accordingly but renewable power sources simply don’t work that way. As such, much of the capacity doesn’t get used.

In a meeting with the Climate Group a few weeks back Greenbang learned that the NGO has made a call to adjust pricing and encourage use at times when energy is overly abundant rather than during the day when demand is high.  Naturally this would need technology that recorded when power was being consumed not just how much, such as Echelon’s.

An alternative is the conversion of the abundant energy into hydrogen.  Greenbang has learned that Scotland may gain the UK’s first commercial hydrogen balancing facility.  It still depends on planning permission, but WHL Energy plans to invest £20 million in a North Ayrshire facility.

The technology uses your basic hydrolysis reaction to convert water into hydrogen and oxygen. The hydrogen can then be liquefied or stored until it is needed when wind speeds are low.  It’s not clear if this will then be combusted or used as a fuel for cars.