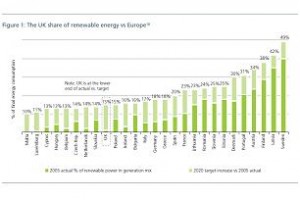 It’s a classic case of immovable object (the need to cut fossil fuel energy use and carbon emissions) meets unstoppable force (the government’s decision to slash the deficit with a £40 billion austerity programme). When the estimated cost to meet the UK’s 2020 climate and clean-energy goals stands at £550 billion, the funding mechanisms need to get very creative indeed.

The challenge looks even greater when you consider the vast array of projects and technologies that are needed to get from here, 2010, to there, 2020.

That’s why a report issued today calls for the creation of a Green Investment Bank (GIB) tasked with finding ways to tackle climate and energy investment barriers, as well as to better coordinate the efforts of an assortment of agencies, funds and initiatives currently working in those areas.

“The traditional approach of simply increasing the rewards to investors in the low-carbon economy has delivered only a fraction of the investment needed,” said Nick Mabey, coauthor of the report — “Unlocking investment to deliver Britain’s low carbon future” — released today by the Green Investment Bank Commission. “It is time for a new approach.”

The report notes that financing needed to create a low-carbon economy dwarfs the amount spent on the UK’s “dash for gas” in the 1990s. That investment came to around £11 billion, “which was considered transformational at the
time.”

Rather than simply providing capital for energy and climate efforts, the Green Investment Bank should focus on lowering risk for investors, the report recommended. It could develop a variety of financing strategies for low-carbon technologies and infrastructure, including:

“The GIB, with its focus on innovative risk mitigation, will send a strong signal to investors that the UK is serious about its low carbon transformation,” Mabey said. “By unlocking major new streams of investment the GIB will give greater certainty of meeting the UK’s climate change targets and give better value for money to taxpayers and energy consumers.”

“It is a tremendous opportunity to rapidly scale up the investment we need to tackle climate change, whilst simultaneously creating the jobs and industries of our future,” added James Cameron, executive director and vice chairman of Climate Change Capital and also a member of the Green Investment Bank Commission.

A number of organisations quickly responded by welcoming the commission’s recommendations:

“The (Energy Technologies Institute’s) investment approach is very much in line with the proposals in the report, which recommend that government funding for low-carbon innovation should be channelled through ‘commercially structured investments’ which would allow the UK to ‘double or treble the private sector leverage, while doubling the pace of development,’ ” said David Clarke, chief executive of the Energy Technologies Institute. “The commission also recommends that support for the delivery of UK’s emission reduction targets should be based on a ‘public-private investment model and address specific market failures and investment barriers in a way that will achieve emission reductions at least cost to taxpayers and energy consumers.’  This aligns with the structure and operation of the Energy Technologies Institute.”

“Developing a greener UK will not only cut our climate-changing emissions: it will boost the economy, reduce our reliance on overseas fossil fuels and build a safer, cleaner future for us all,” said Simon Bullock, senior economy campaigner for Friends of the Earth. “But we cannot afford to dither — the coalition must make setting up the Green Investment Bank a major priority.”

“The GIB needs to fill the equity funding gap for emerging companies supplying new technology into the ‘green’ sector that the private sector will not provide — straddling the ‘valley of death’ for early stage financing,” said Vimal Vallabh, director of corporate finance for PricewaterhouseCoopers. “It will require the government to assume a higher risk profile than those in the private sector are prepared to take on. What the bank should not do, is compete with private capital. It should be there to support the establishment of a low carbon economy.”