UKHA and AMEC call for Olympic flame to be green… and red, gold, blue and black 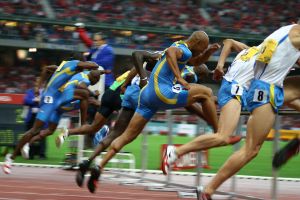 June is finally here. Which means summer. Which means the Olympics is getting closer. Which means Greenbang is excited at the prospect of two weeks without sleep, keeping a vigilant eye out for environmental news by day and screaming at the British rowing team by night.

And, surprisingly, we’re not the only ones. The engineering firm, AMEC, and the UK Hydrogen Association (UKHA) have also recognised the problem of burning a swathe of gas for two weeks and made calls for the 2012 flame to be fuelled by hydrogen.

The announcement has come amidst calls to commercialise hydrogen power and the backlash of transporting a flame to 20 countries with a total distance of 137,000km travelled.

And not only does using hydrogen reduce the carbon released it also has an effect on the flame too. According to the UKHA the flame can now be ‘designed to be multicoloured’. Now, Greenbang is desperately trying to think back to her chemistry A-level and doesn’t remember this side effect being mentioned by Mr Rudkin, but we’re happy to take the UKHA’s word on this one.