UK wind: only for the rural 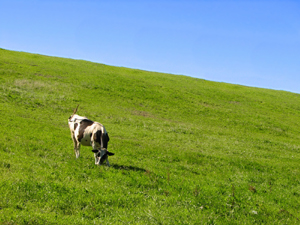 Greenbang went to the country once. She wasn’t quite sure what all the fuss was about – sure, there’s scenery that would bring a tear to a glass eye and country pubs with open fires and salt-of-the-earth landlords but could you get a Ginsters pasty and a bottle of Lucozade at half past three on a Monday morning?

Could you heck. Foot and mouth, maybe, but no minced pig fat in a pastry sock and Daley Thompson endorsed pop.

Still, if the Carbon Trust has got it right, the country mice are beating the town mice into a cocked hat when it comes to small scale wind energy.

The Carbon Trust has been crunching the proverbial numbers and found out while small scale wind energy could generate 0.4 per cent of Britain’s energy needs (yay!), it’s only really a viable proposition in places where electricity is still considered witchcraft – that’s rural areas to you.

Greenbang can almost hear the collective ‘but why?’ coming from the pasty and Lucozade classes.

Here’s why, according to the Carbon Trust:

This is mainly due to wind speeds generally being higher in rural areas. Turbines in some rural locations could provide cheaper electricity than the grid, but it appears that in many urban situations, roof-mounted turbines may not pay back their embedded carbon emissions.

This little nugget of wisdom is spawned from a report that comes after 18 months of research by the Met Office and eco-consultancy Entec. It also recommends that:

• A criterion should be used in any new grant schemes to measure likely carbon savings. This is to help ensure grants are awarded to installations which save reasonable amounts of carbon; and
• Higher height limits for stand-alone turbines should be allowed under permitted development rights. This is to help maximise the overall carbon savings of small-scale wind energy, given the sensitivity of electricity generation to height.