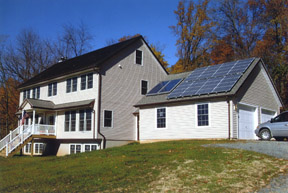 Putting up a small wind turbine or solar panel on your roof might not only be a way to save money on your energy bill, but a way to make money as well.

At least, it will be if you live in the UK.

Starting this April, the British government plans to start paying cash rewards, called a feed-in tariff, to citizens who generate their own energy with micro-turbines or solar panels. It also wants to begin offering similar incentives next year for homeowners who install low-carbon heating systems — the world’s first such renewable heat reward.

“The feed-in tariff will change the way householders and communities think about their future energy needs, making the payback for investment far shorter than in the past,” said Ed Miliband, Britain’s Secretary. “Energy and Climate Change. “It will also change the outlook for a range of industries, in particular those in the business of producing and installing small-scale, low-carbon technology.”

The feed-in tariffs will reward homeowners not only for any additional clean energy they generate and send back into the grid, but even for the renewable electricity they use themselves. A typical, well-sited 2.5-kilowatt solar panel, for instance, could reap a homeowner up to £900 a year, as well as saving about £140 annually in electricity bills.

The British government views home-scale renewable energy installations, known as microgeneration, as a way to both increase the amount of locally produced green energy and to help enable a national energy shift to low-carbon sources.

Small-scale renewables can also help address the problem of energy poverty, according to John Swinney, director of strategy and corporate services for the eaga Clean Energy for Social Housing programme. Low-income housing in Dagenham, for example, offers tenants free clean-energy technology to reduce both their electricity bills and carbon emissions.

“By utilising the feed-in tariff initiative and installing free solar technology, this programme can cut energy bills for those most in need,” Swinney said, adding that it also provides a jobs boost. “We are also recruiting and training renewable energy engineers directly from the local communities where the green technology is being installed … We expect thousands of households to benefit in the first few years and up to 300 additional green energy jobs could be created as part of this programme.”

The first-ever payments for renewable heating systems, to come into effect in April 2011, will reward homeowners who install technologies like ground source heat pumps, biomass boilers and air source heat pumps. The programme could provide the owner of a typical semi-detached, well-insulated house with a payment of up to £1,000 a year, as well as an annual savings of about £200 for heating oil, for installing a ground source heat pump.