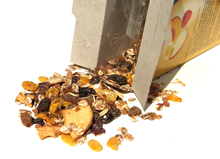 Ever wondered why the UK is a little (ahem) behind when it comes to renewable energy? It’s all about politics and cereal, says The New Statesman.

Apparently Jonathon Porritt, chair of the Sustainable Development Commission tells the august organ that it’s all about Gordon Brown’s image crisis. The scamp.

“Old Labour still thinks the environment is an agenda for middle-class, muesli-munching Guardian readers. And that’s still a bit of Brown,” says Porritt. “He’s got this sort of latent contempt for anyone who chooses to put the environment at the top of their list of things that need to get sorted.”

Brown’s negative attitudes may have been influenced by political rivalry with Tony Blair, Porritt believes: “When Blair was in power strutting his stuff about climate change, Brown came to the quite proper pragmatic conclusion that if he’s out there doing that then I’m not going to do it.”

As a result, Brown put “no serious money” into energy efficiency and renewable power while Chancellor. “The Treasury under Brown never really understood sustainability,” Porritt says. “Many of the reasons why the Labour record on sustainability after ten years is less good than it should be, go back to the Treasury.”