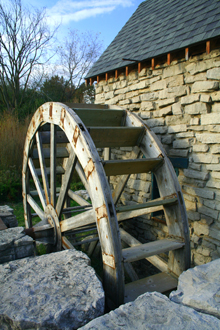 Those analyst types over at Frost and Sullivan have come up with this assessment on the wave question:

Wave energy sources are not only available in plenty, but are also consistent, predictable and have the highest energy density among all renewable energy sources. The best resource is found between 40-60 degrees of latitude where the available resource is 30 to 70 kW/m, with peaks of 100 kW/m. The potential worldwide wave energy contribution to the electricity market is estimated to be of the order of 2,000 TWh/year, about 10% of the world electricity consumption.
The marine energy sector is set to grow faster. However, as it happened for the wind energy, government support, financial investment and technological advancement are needed to see the marine energy sector reach commercialisation.
“Wave energy technology” explains Frost & Sullivan Research Analyst Gouri Nambudripad, “is being developed in a number of countries such as Canada, China, Chile, India, Japan, Russia and the US. However, Europe is leading the way in innovative technologies, pilot projects as well as pushing the existing technologies towards commercialisation including countries such as UK, Ireland, Portugal, Norway and Spain. In tidal energy, Canada, Argentina, Western Australia and Korea possess the resources, but here again Europe is a frontrunner, with the UK and France seemingly promising.”
“The UK – having some of the best wave resource in the world – is targeting 40% of its energy from renewables by 2050 of which 20% is to be sourced from wave and tidal energy,” continues Gouri Nambudripad. “The UK is estimated to possess the capacity to generate approximately 87TWh of wave power annually equivalent to 20-25% of current UK demand. Moreover, the UK has committed GBP 25m since 1999 towards the wave and tidal programme.”