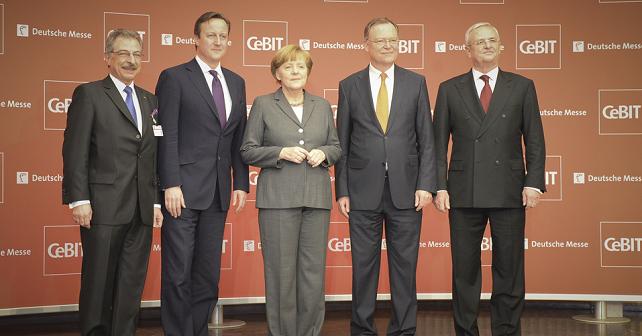 internet of things8
As two countries that have made new technology development a priority, the UK and Germany are teaming up in hopes of doing even more...

As two countries that have made new technology development a priority, the UK and Germany are teaming up in hopes of doing even more to promote economy-building digital innovations.

Both UK Prime Minister David Cameron and German Chancellor Angela Merkel spoke about those goals Sunday at the opening of the CeBIT 2014 high-tech trade show in Hanover. Cameron identified three specific areas in which the UK plans to focus its efforts with Germany: 5G connectivity, the internet of things and strengthening the EU’s digital single market.

The package of measures outlined by Cameron includes £45 million in new funding for research into the internet of things, which envisions a future where everything from toasters to washing machines and telephones can “talk to one another” for better, easier daily living.

“This is a world on fast forward, a world of permanent technological revolution and in this world, countries like the UK and Germany will only succeed if we have a relentless drive for new ideas and innovations,” Cameron said.

“We are on the brink of a new industrial revolution and I want us — the UK and Germany — to lead it,” he said.

To establish the foundation for even more innovation, Cameron said the UK is taking a more flexible approach toward how it uses and manages the entire communication spectrum. It is also launching a new European internet of things grant fund that will offer up to £1 million to qualifying companies.

“Beyond that we need the ideas to turn the internet of things from a slogan to a fact,” Cameron added. “So I have personally tasked the government’s Chief Scientific Adviser to explore what more we must do in this area.”

5G would enable mobile connection speeds far greater than those available today. An 800-megabyte film, for example, takes about 40 seconds to download using 4G; 5G would allow the entire film to be downloaded in just one second.