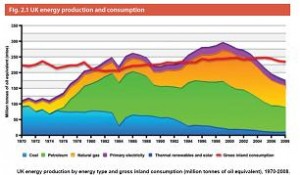 A new roadmap from the UK’s Centre for Alternative Technology outlines the route Britain needs to take to achieve a more sustainable, zero-carbon status by the year 2030.

“Zero Carbon Britain” is presented as a “fully integrated solution to climate change,” but also aims to present a path toward energy security, economic renewal and better living.

“It is a move towards entrepreneurship, resilience, connectedness and stability,” said Rob Hopkins, co-founder of Transition Town Totnes and of the Transition Network. “It offers a return to scale, a bringing home of the impacts of our actions, and a shift to a world that we can hand on to our grandchildren with relief and pride.”

The hefty 384-page “Zero Carbon Britain” draws on the input of dozens of experts from a variety of fields, including climate science, energy security, transport, land use and agriculture, renewable energy, microgrids, policy, economics and employment.

Among the report’s recommendations:

All the strategies outlined — combined with use of biomass crops, biochar and other methods for sequestering carbon — could bring the UK’s emissions down from 637 million tonnes of carbon dioxide-equivalent in 2007 to zero by 2030, the report’s authors say.

“As historically the first high-carbon economy to have developed, and today being a significant net importer of carbon-intensive goods, the UK has a particular responsibility to take political and practical leadership in the international process of decarbonisation,” said Sir John Houghton, former co-chair of the Intergovernmental Panel on Climate Change and a contributor to the “Zero Carbon Britain” report. “In order to effectively eliminate carbon emissions from British industry, homes, power generation, and transport systems, the report seeks to ‘power down’ high-carbon living by reducing energy demand, so as to facilitate a transfer to fossil-free supply. Importantly, the carbon reduction benefits are placed in the context of wider benefits of ‘regime change,’ including avoiding the spectre of ever more expensive and scarce oil, the opportunities for ‘green jobs’ and the creation of a more equitable society.”