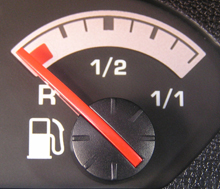 Like a Hollywood starlet that’s just discovered ephedrine, hydrogen cars could shortly be dropping a lot of mass, thanks to researchers at UCLA Henry Samueli School of Engineering and Applied Science.

After all, no one likes being that little bit larger than normal, even hydrogen cars, which have been dogged by the oversize issue for a while – hydrogen cars need a larger fuel tank than their petrol counterparts, and in some cases, larger than their trunk.

Now those cunning folk at UCLA have come up with a way of slimming down the tanks by identifying better ways to store the gaseous fuel, according to Science Daily.

Here’s how the scientists explain it:

Hydrogen is a potential source of clean energy for future use in passenger vehicles powered by cheap and energy-efficient fuel cells, but its widespread adoption has been hindered by the need to store it on-board at very high densities.
A promising solution to this problem involves storing hydrogen within a material in the form of a chemically bound hydride, for example lithium hydride (LiH). Unfortunately, simple binary hydrides, in which hydrogen combines with light elements such as lithium, sodium, magnesium or others, do not adequately satisfy the requirements for on-board storage, as the hydrogen-yielding reaction requires heating the material to impractically high temperatures.
Because of this, researchers have turned to multicomponent hydride mixtures with higher volumetric and gravimetric densities, better operating temperatures and improved reaction rates for practical hydrogen storage. However, this flexibility comes at the price of drastically increased complexity associated with the large number of competing reactions and possible end-products other than hydrogen. Thus, predicting desirable hydrogen storage with multicomponent mixtures has proved difficult.

Nevertheless, UCLA has come up with an algorithm that identifies the reaction that are most suitable, which will help the scientific and engineering community to develop new ways of storing hydrogen.