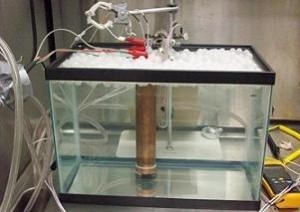 More than 20 years after the term “cold fusion” became a pariah in the science world, researchers are once again speaking about it … not only openly, but enthusiastically.

“Years ago, many scientists were afraid to speak about ‘cold fusion’ to a mainstream audience,” researcher Jan Marwan told attendees at a symposium on “New Energy Technology” held during this week’s National Meeting of the American Chemical Society (ACS) in San Francisco. “Now most of the scientists are no longer afraid … More and more people are becoming interested in it. There’s still some resistance to this field. But we just have to keep on as we have done so far, exploring cold fusion step by step, and that will make it a successful alternative energy source.”

Marwan, who heads a research firm in Berlin, added, “With time and patience, I’m really optimistic we can do this!”

In all, the energy symposium is expected to feature nearly 50 presentations on the potential for cold fusion — that is, fusion energy that doesn’t require Sun-like temperatures and multi-billion-dollar reactors. Some of the recent advances to be discussed include:

The term “cold fusion” entered the popular lexicon in 1989, when researchers Martin Fleishmann and Stanley Pons claimed they had achieved nuclear fusion at room temperature using a simple, inexpensive tabletop device. However, the wild excitement that greeted their news quickly dissipated when other scientists couldn’t reproduce their results. Pons and Fleishmann eventually closed their labs and left for France to continue their research at a laboratory sponsored by Toyota. That lab closed in 1998 without any success in achieving cold fusion, and the term itself fell into disrepute.

Recently, though, the pendulum has begun to swing back in the other direction. A growing number of studies on the topic have been published in academic journals in the past few years and the ACS has seen a quadrupling in cold fusion-related presentations at its National Meetings since 2007.

“The field is now experiencing a rebirth in research efforts and interest, with evidence suggesting that cold fusion may be a reality,” Marwan said.