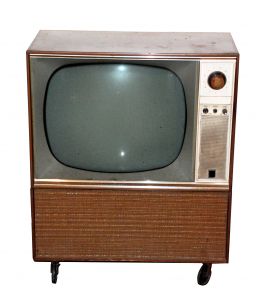 Greenbang has interviewed a number of Deloitte’s research analysts.

Analysts are sometimes bang on right, but they have been known to duck the odd question and point out the bleeding obvious.

This time Deloitte says that an increasing number of TV sets in the world mean that “television’s impact on the environment appears bleak.”

The report, ‘Here’s one I made earlier: perspectives on the UK television sector’ will be presented to all television executives attending this year’s Edinburgh International Television Festival (24-26 August).

It says ‘device proliferation has been a key outcome of the convergence of technology, media and telecommunications in the living room. And with it, the power consumption associated with the simple act of watching television has skyrocketed.’

“New products driven by advancing technologies that are fashionable with consumers are also dramatically increasing electricity consumption. An average plasma screen consumes 9.4 watts per square inch and emits around 400kg of carbon dioxide per year[1]. Compared to its predecessor the Cathode Ray Tube (CRT) consumes just 3.4 watts per square inch. The current holder of the Green Television of the Year award, Philips, has a prize winning model with a 42 inch screen that consumes 210 watts of electricity[2]; a typical 28-inch CRT consumes just 87 watts.

Other areas of concern in the report include less obvious causes of increased energy consumption: ‘Digital switchover, which commences in the United Kingdom with the Cumbrian town of Whitehaven on 17 October 2007, implies increased power consumption. Ofcom has estimated that a typical household’s power consumption will rise by up to 0.4 kilowatt hours per day[3]. In terms of cost, a household with two Freeview (digital terrestrial) receivers can add up to five per cent to a typical home’s electricity bill.[4]’

On a more positive note the report draws attention to attempts being made to reduce unnecessary power consumption. For example, BSkyB is rolling out a facility for its set top boxes that will force devices into standby when not in use[5]. It estimates that this will reduce carbon dioxide emissions by 32,000 tonnes a year, equivalent to all the washing machine use in Liverpool over a year.

Jolyon Barker, Head of the Technology, Media and Telecommunications practice at Deloitte comments “As environmental concerns move up the agenda the television industry will need to be more proactive in tackling rising energy use. The Energy Savings Trust estimates that power consumption for television and other information and entertainment devices could reach 50% of a total household’s power consumption by 2020[6]. This is not an issue the industry can afford to ignore. “