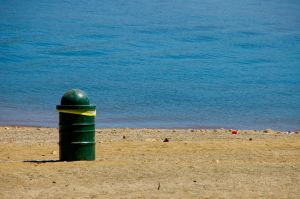 A British family sent a bin of household rubbish to the landfill today … nothing remarkable about that, right? Except that this was the first bin they’ve emptied in an entire year.

Rachelle and Richard Strauss, along with their nine-year-old daughter Verona, began on their personal quest to reduce waste in 2008. By the following year, they had made a pledge: to empty their dustbin just once in 2009. They made it all the way into 2010 — this morning at 7:45 am, according to The Daily Mail — before they needed to take their bin outside for pickup.

The Strauss’ goal for this year, now that last year’s rubbish is gone? Zero waste to landfill.

“Our vision is for a zero waste UK; a country where we rethink our rubbish and start to view it as a resource rather than a waste product,” the Strausses write on their website, MyZeroWaste. “Our belief is that a zero waste Britain is possible if more energy, money and care is put into education, innovative product design and recycling facilities.”

OK, so that’s the why. But what about the how? How does a three-person household cuts its trash footprint so dramatically while still keeping up a typical British living standard?

The Strausses go into great detail on their website. Step one, obviously: Reduce, for which they recommend everything from buying in bulk to simply removing the kitchen bin (“The out of sight out of mind approach … “). Step two: Reuse (turning used coffee grounds into snail and slug repellant, taking their own food containers to the butcher’s shop, wrapping gifts with junk mail). Step three: Recycle (even sending their empty crisp packets to a Philippine charity that turns them into wallets, bags and purses).

Obvious stuff, maybe. But imagine if everyone followed these practices as assiduously as the Strausses. Makes a zero-waste society seem like less of a pipe dream, more of a real possibility, doesn’t it?