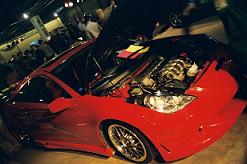 The President of Toyota Motor Corporation, Katsuaki Watanabe, has indicated a timescale on the company’s environmental agenda, further to last weeks response to the company’s sustainability mobilty vision.

The announcement was made at the North American International Auto Show, where Watanbe confirmed that a new clean diesel V8 engine will be available. He said Toyota will produce a significant fleet of plug-in hybrid electric vehicles (PHEVs), powered by lithium-ion batteries.

In its press release, Toyota said:

To make this happen, Toyota has already started the planning phase to expand its Panasonic joint-venture battery factory. The expansion will add an assembly line to build lithium batteries for automotive applications.

Finally, Watanabe invited the media to attend next year’s NAIAS, where Toyota will stage the world premieres of two all-new, dedicated hybrids, one for Toyota and one for Lexus.

“These two introductions will move us closer to our goal of selling a million hybrids per year in the next decade,” said Watanabe.