is moving forward with a project to further increase the efficiency of hybrid cars.

A123 Systems is behind the nifty little widget and in this photo you can see CEO David Vieau meeting president George Bush to show off his gizmo. 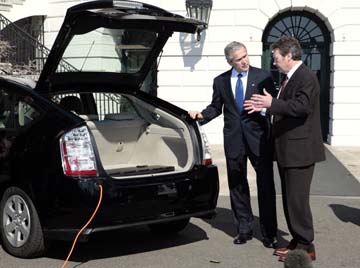 “A consortium of Toronto fleet owners, including the City’s and Province’s own fleets, will soon be plugging some of their vehicles into a pilot program designed to test the performance of a new breed of hybrid vehicles that promise to reduce carbon dioxide (CO2) emissions by 40 – 60 percent when partially fueled with Ontario’s electricity.

The Toronto Plug-in Hybrid Vehicle Pilot Project was developed by the Toronto Atmospheric Fund (TAF), a City of Toronto agency, in partnership with Hymotion, an Ontario transportation engineering company, and its parent company, A123Systems, a Massachusetts lithium ion battery
company. The project will convert 10 conventional hybrid vehicles into plug-in hybrid electric vehicles (PHEV) that can be charged up at any power outlet, allowing them to double their all-electric range and stretch gas mileage to an amazing 2.4 litres/100 kilometres or 100 miles per gallon.