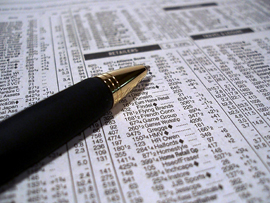 Those crazy Tories. What will they think of next eh? The answer is a green trading market, much like the AIM. Sorry to disappoint you if you were hoping the answer was going to be a Conservative machine for time travel able to bring the cream of Tory PMs back from the grave, with Robert Peel ready to pitch in on the biofuels debate – he knew a lot about corn, after all. Although that would be rather good too.

Back to the green AIM. According to the venerable Financial Times, the Tories will be setting out plans for a green trading market called, not altogether snappily, The Green Environmental Network or GEM. The plan comes from shadow chancellor George Osbourne, with some help from his friend, LSE CEO Clara Furse.

He has asked Stanley Fink, former chairman of Man Group, and Marcus Stuttard, deputy chairman of Aim, to advise on the tax and regulatory regime needed to ensure the new exchange is internationally attractive.

Mr Osborne said he was “open” to the idea of giving capital gains tax breaks to companies that list on the GEM, similar to those that made Aim a success. He wanted to create “a buzz” around the new market.