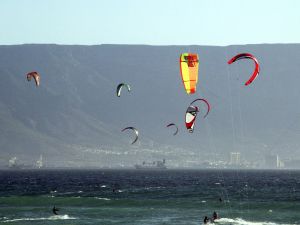 You know how it goes; It’s Friday night, you’ve had a beer (or four) and somehow the conversation turns to the oddest green technologies. Well, this happened to Greenbang’s D. Lorenz this weekend, here are his conclusions.

Greenbang can’t help but ponder how spooky it might be to get marooned on one. How do they not just get blown around the sea or blown over?

A small distance off the south coast of Italy Blue H will shortly switch on the first such turbine. The company swats away such humorous fripperies.

“Blue H has developed a new solution by adapting the concept of submerged tension-legged platforms developed by the oil industry for some of its offshore rigs, and designed a platform large and stable enough to support a tower and a wind turbine,” says the release.

Algae hasn’t always had a good reputation. Mostly it’s known for propagating horribly thanks to fertiliser run-off and choking ponds resulting in the death of many a pond creature.

But, as Greenbang has repeatedly reported, it can be good too. Especially if its genetics are toyed with using a little prodding from scientists. Algae takes CO2 from the environment and turns it into biomass which can in turn be used as a biofuel.

This one got picked up like the proverbial hot cakes in the nationals, mainly because of the accompanying picture showing a cow farting into an inflatable pink rucksack.

Argentine researchers want to further study the effect of cow-released methane on the environment, and this is how they are collecting it. Let’s just hope that none of them fall into the container.

Greenbang had been told by the “fat man down t’ pub” that being buried under a forest helped ensure it could not be chopped down, as she cannot find evidence of this legal loophole liquification is possibly the greenest way to dispose of a body.

Funeral directors are looking at it as the greener alternative to cremation or burial. The process is called alkaline hydrolysis and is already used for dissolving animal bodies and lab specimens. It’s more efficient than cremation and the resulting sludge is safe enough to flush down into the US sewer system. It is also a highly effective way of destroying and decontaminating a diseased body. Still, eurgh.

This 2001-esque monolith would surely by one of the wonders of the modern world. Its science is relatively simple. The sun heats air via a wide array of panels on the ground. The air then rises up and out through the solar tower, driving internal turbines. The panels also store heat and release it throughout the night.

The technology has been tested and proven with a successful small-scale pilot plant constructed in Manzanares Spain.

Imagine a lot of kites attached to a rotating cable. Some are designed to pick up wind, like an aeroplane wing on “lift” those on the other side (coming down) are designed not to lift, thus turning the cable.

Simple, right?. The system was successfully tested last year by Dutch company Ockels and the two short films on its web site give a nice visual demonstration.

Inspired by the flippers of humpback whales, this technology will essentially serrate the sharp edge of wind turbines in order to lessen the already-small survival chances of skydivers who hit them. This might not be the real reason but it does give a good mental image. In fact, the dynamics make the turbines more efficient. As the website says: “Standby! The Whale is about to break through conventional limitations.”

The enerjar is a DIY power meter that sits inside an old (hopefully reused) jam jar. You can build and calibrate it yourself from pretty easy to find components, which ticks numerous environmental boxes. It will then measure energy use, which as we all know is the first step on the path to reduction. Ummm, that’s about it, did we mention its in a jar?

The panels on this bikini charges up and stores electricity that can then be used to power very small things, like an iPod nano. If men don’t want to wear it, they can sit it on the beach next to them.

Though frankly, if they’ve got an ipod nano, they’re not men.

An old favourite from the “inflatable dartboard” school of alcoholic inventions, this is actually a reality. It charges during the day and shines light during the night.

Thinking about it, it’s actually not that weird. But, as solar cells are expensive and have a reasonable footprint of their own can Greenbang recommend a wind up torch instead.