Together we’ll succeed, but only if we tell the truth 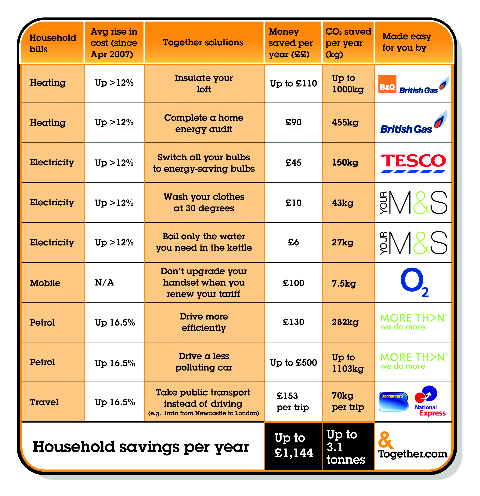 Congratulations to Together, the climate campaign (in fact “the UK’s biggest climate campaign”) which aims to show us all how we can do our bit to save the planet by installing energy-saving lightbulbs and running the washing machine at 30 degrees….and a few other things as well.

Anyway, it’s a year since the campaign was launched with the blessing of Tony Blair (remember him?), and it will be celebrating its first birthday on Tuesday with a conference at Lambeth Palace, and speeches from the great and the good including the Archbishop of Canterbury.

The campaign will also be launching its new Savers Guide to help us all on our way to green living, and is keen to point out that not only can we reduce our carbon emissions by up to 3 tonnes a year, but we can also cut our households bills. So everyone’s a winner, right?

As it says: “In just a year, voluntary corporate efforts pledged under the campaign have helped British consumers save half a million tonnes of CO2 (equivalent to taking 195,000 family cars off the road for a year) and over £100million pounds on household bills.”

While this is to be applauded, Greenbang wonders about some of the figures the campaign uses to justify its claims.

For instance, it reckons that choosing to go from Newcastle to London by train would save you £153, compared with going by car, and also save 70kg of carbon emissions. No quarrels with the carbon emissions, but where do they get that money saving from?

Their answer is as follows: “CO2 savings based on Defra passenger transport conversion factors, and cost savings based on standing charges and running costs for an average petrol car (AA) versus an advanced single train fare (National Express East Coast).”

Hmm. So they assume you’re travelling alone in the car, and you book your train ticket ages ahead in order to get the very best fare. Well, OK, in that case you can justify the claims. But if campaigns like Together are going to make a more convincing and credible case, Greenbang would humbly request some rather more realistic comparisons. Or campaign to get our sky-high train fares reduced….we’d support that.

We attach the Saving Guide anyway, for you to judge.