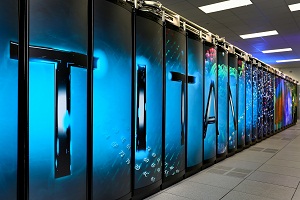 A technology first created for computer gaming is helping to launch a “new era of scientific supercomputing.”

The US Department of Energy’s (DOE) Oak Ridge National Laboratory (ORNL) has kicked off that era with Titan, a 20-petaflop supercomputer that can handle 20,000 trillion calculations per second. That level of performance is being made possible by using graphic processing units, a family of processors first developed for computer gaming.

According to the ORNL, Titan will provide “unprecedented computing power for research in energy, climate change, efficient engines, materials and other disciplines.”

The system is 10 times more powerful than Jaguar, the ORNL’s previous supercomputing champ. And with the addition of the graphic processing units, Titan will be able to outperform its predecessor while occupying no more space and using only marginally more electricity.

“Titan will allow scientists to simulate physical systems more realistically and in far greater detail,” said James Hack, director of ORNL’s National Center for Computational Sciences. “The improvements in simulation fidelity will accelerate progress in a wide range of research areas such as alternative energy and energy efficiency, the identification and development of novel and useful materials and the opportunity for more advanced climate projections.”